Tuesday night was also a nervewracking evening for me. Not only was it the night before my dentist appointment, but it was the night I was attending the Fredericksburg Photography Club and for the first time submitting photographs of mine to be critiqued by a professional photographer.

To say I was nervous was an understatement. I had attended one previous critique at the club and the guy was kind of a jerk about the whole thing. The highest score he gave anyone was a 6 and most people got a 3 or a 4. By the end of his time there, people were actually quietly laughing because they knew they were going to get raked over the coals for no good reason.

So I went in and paid my dues to join for the year and signed in my photographs. My stomach clenched up and I headed for the bathroom. I returned, forced myself to be calm, and sat it out.

The theme for the night was "depth of field" and our images would be scored 1 through 10 on whatever criteria the judge selected. The judge for the night, well I didn't exactly catch his name but I know his first name was Tim. He's been a professional photographer for 30 years and has worked for Xerox and other imaging companies. Unlike the previous guy, he did not judge us on subject matter. He was judging based on color, composition, how it fit the theme, and so forth. The judge did not know who the photographers were until after he gave the critique.

Of course my damn pictures were at the bottom of the pile, so I had to sit around for nearly 2 hours before they got to the first of my 3 pictures, even though the pictures had been mixed around some.

The guy who did the critique was very fair and knowledgeable. Not only did he give what he liked about each picture, but he also talked about how you could improve it at the moment you take the picture, or how you could manipulate it during processing.

The first of my pictures he came to was one I titled Washington and the Cherry Trees. 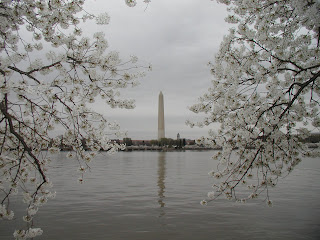 As you can see, I took it down at the Tidal Basin during the Cherry Blossom festival on a very cloudy day.

His critique: He called this an interesting picture showing extreme depth of field. He wondered if the color had been manipulated because at first glance it appears black and white but as you get closer you realize it is in color. He said the monument was a bit dead center. Typically this would not be desirable but it works in this picture, although I could move it up some. He suggested that if it were to be entered into the show, it should be cropped a bit to get rid of the specks on the top and that playing with it on photoshop to make it black and white would be interesting. He also said that without the water providing the bridge between the front and back of the picture it would not work as well.

After the critique is done, they ask if the photographer has any comments. I was giddy. I got an 8!!! So I said, "No, not really, this is the first time I've done anything like this and I'm so nervous I think I'm going to throw up!" Well, everyone had a good laugh about that and then I settled down and told him that I had not manipulated the color or anything at all like that. I told him that I'd just been pointing and clicking and that whatever comes, comes and I print it. He found that interesting.

(I am really looking forward to cherry blossom time--it's coming up in just a couple of weeks and my camera finger is already itchy. Jacalyn's lending me one of her old cameras to go shooting with so I can get the feel of a real camera and not a little point and click, which I have to say, each of these images was shot on a different point and click and I think they all came out amazingly well, so I have nothing against my point and click cameras! But I would like to try working with something a bit higher up too.)

The next image I put up for critique I left untitled. 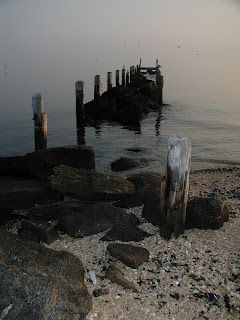 This is a jetty or piling I found while taking an early morning walk along the Long Island Sound when I went to a conference in NY about 2 years ago. It was a very foggy morning and about 7:00am. A group of us attendees would walk about a mile down to the beach and I shot pictures while everyone else wandered around.

Tim called this picture "very interesting." He said the white post in the front anchored the image and really stood out to him. The landscape gives a lot of depth and he really liked that the lighting was shifting from dark to light. He suggested that the bottom of the image could be toned down a bit so it wasn't so harsh.

The final image I submitted was entitled Washed Up. 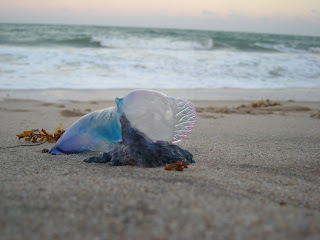 I took this picture while visiting my mom in Florida. I wanted to get a picture of it because I thought it was a real neat looking man-o-war, but as I was standing over it, I was thinking "This is a really stupid angle to get a jellyfish at." So I knelt down and put the camera in the sand and clicked the button. Voila.

Tim said it shows depth of field extremely well. He wondered what it was, so when I told him, he knew it was me who had taken the picture. But he remained fair, I will give him that. He wished the horizon would have been straighter and that I had lowered the image a bit, but that he said he was sure that I was already as low as I could go and probably couldn't tell if it was straight or not. He said the exposure was a little bit dark and if I could add a little fill flash it would have been a good idea. He asked if I knew what he was talking about and I said, "Not a clue!" So he very patiently explained everything, which was great.

Then he asked me how long I'd been shooting and I said about 5 years of just point and click. He said my images have a lot of potential and I obviously have a very good eye. He suggested I learn techniques for getting at the small details in the pictures and start learning to use something like Photoshop to tweak what I miss while shooting (on Jacalyn's suggestion I downloaded Picasa last night and straighted out the horizon on Washed Up, but I posted the original here, not the corrected image). He said if I work at it, he thinks I have the potential to be really good.

So, wow! I think it went very, very well for my first time and I was definitely encouraged to continue. I thought I might be kind of good, but I wasn't really sure and it was nice to have some encouragement from people who know what they're doing.

The next critique is of "blossoms" in 2 months time. Next month will be an educational program on how to shoot candid photography. I am looking forward to learning that in particular. We can also bring one picture we've taken of a candid moment. So I'll be scouring around looking for one. Tim will be presenting and looking at our images.

I think also that you have some potential in you when I saw the first picture. I think it's good what you are doing now to attend these classes, you will see you will LOVE more doing photography with all that knowledges you will get from there.

Congratulations to your decision! :-)

Very cool that you got such high marks from the guy! Your pictures are great - I esp. like the cherry blossom one. The man-of-war I thought was awesome right off the bat...didn't notice the horizon at all, until you pointed it out!!!!

I just finished a Stephanie Plum book...it's the one with Mooner and his "super suit" - the full body spandex number, I think they were purple...and Mooner safety pinned a towel to it for a cape. Do you remember? Maybe you need a get-up like that to be "Super Sue!!!!" :)

Awesome pictures. All of 'em.

I think they are all great pictures and I am in awe of your awesomes, Suuuuuuuuuuper Suuuuuuuuueeeee!

One of the pictures you took in Savannah, the close up of the dark pink flower (I think was in the garden at the JGL Birthplace) that I have no idea what type of flower it is...well, anyway, I love that picture and have it as my computer desktop wallpaper at work!

Thanks for the great feedback, everyone! I am inspired to continue. I'll be posting some pictures closer to May so everyone can help me decide which blossoms to have judged.