An evening with Alton Brown. 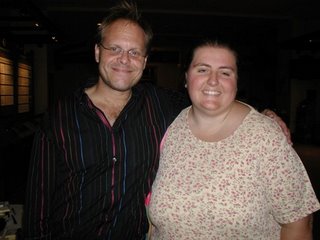 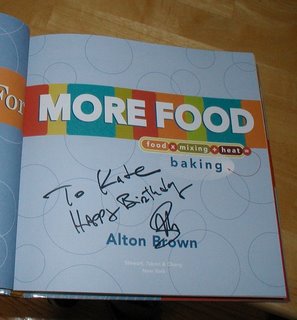 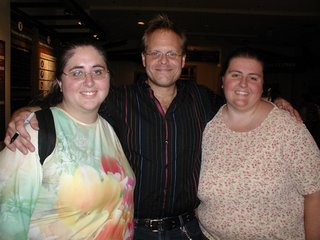 In a word: Fabulous

This has been one of those weekends you don't usually have when you leave college... We were up till 2am Friday and Saturday, catching cat naps, non stop parties, sightseeing, and company that has left me completely unable to give a crap about returning to my workaday life this morning.

Friday night we had our Pirates of the Caribbean party. We had 2 last minute cancellations, sadly, but it was a blast nonetheless. We all dressed up as pirates, and Joe and I sponsored a little treasure hunt. We also had a pinata pirate ship which everyone took a crack at. As we were outside with that, people driving by were yelling "AHOY MATEY!" and "AARGH!" out their car windows as they drove past.

We went to the theater in costume and people yelled more as we got there... I was surprised, only one person made a joke about what movie we were going to see, and several expressed envy at not a) dressing up themselves or b) knowing us so they could have been invited.

I will post pictures when they get sent around. Per usual, I didn't have time to take any. I was busy cooking!!! Our menu was Caribbean jerk chicken, rice, Caribbean jerk roasted veggies, and steamed shrimp.

The movie itself was fantastic. I really enjoyed it. It was a good bit more serious than the first one, but there were lighter moments, and it was flat out action-packed. I was disappointed with the ending, which was little more than the set up for #3, which will be out next year. But it's something to look forward to.

Saturday morning we were up early and did a MyPC event to Montpelier, James Madison's home, which is a little less than an hour away from here. The home was left to the National Trust for Historic Preservation, or some such thing, by the Dupont Family, and is in full restoration back to the way it was when the Madisons lived there. It was a riveting little tour, since once it's complete, no one will ever see the bare bones of the structure and get that look at it again (for instance, the door we used to enter the house is going to be converted back into a window!). I didn't know much about James Madison or about the house, so it was a really interesting day.

When we got back home, we tried the new Greek restaurant in town that everyone's been raving about. It really was quite fantastic. Melissa left, and I fell asleep and took a 3 hour nap.

Joe had come back with us Friday night, and we had planned to go see the Pirates again, but the General vetoed that idea, and we decided to go over to Central Park to see if the arcade over there had Skeeball. It did, but it also had a $22 cover and so we decided to check out Chuckie Cheese instead, and for the price of the other place's cover, we were able to play Skeeball for hours. We played a lot of other games as well, and have started our collection of tickets to turn in for a prize eventually.

After that, we went to McDonald's for Pirates of the Caribbean happy meals (I haven't had a Happy Meal in ages, but I must say, they don't make a bad little meal), moved all the bunnies up to the bunny room and then drove Joe back to Alexandria, as I had forgotten Michael had invited company over to lunch on Sunday.

We got home around 2:30 and I cleaned up a bit, as I wasn't too tired due to my nap. Yesterday, I got up, did the grocery shopping, cleaned up the house, and we had Ken over for the better part of the day. He was such a great guy--I'm glad Michael works with him. He asked me what he could bring, and I couldn't think of anything, so I told him to bring something purple. He brought me a purple light up yo yo. It is the greatest present... I'm loving playing with it.

I finished off the evening with the final installment of my guilty pleasure, My Fair Brady... The wedding special premiered last night, and I was impressed at the amount of drama they still managed to pack into such a happy time. Hopefully they'll live a long and happy married life, we'll see :)

So now I must conclude here, lock Rambo back in his cage and head to work. Tonight is the big night--I'm meeting Alton Brown from the Food Network, who is giving a presentation at the Smithsonian. I'm so excited!!!! Hopefully he'll pose for pictures and I'll have something to post.

I think we're becoming Dave Barry groupies. He's been to DC three times in the past two years, and we haven't missed an appearance.

Plus, I regularly read his blog and leave comments if I feel like it--I'm not much of a "joiner" on these things.

At any rate, I've been Barry blogged twice in the past week, and that probably means it's official... I'm definitely beyond your average reader, at any rate.

Not only did he post a link that I sent him last week, but this week, he posted my picture, as some other Barry Bloggers and I met last night at his latest book signing and took a group picture with him.

Yeah, OK, I'm all about myself today.

Client situation has been diffused.

One of those Days

I had one of those days last Friday, and it's been haunting me ever since... Now, granted, EVERYONE (including my boss) told me not to worry about it, it was nothing I should get upset about, and I could just get on with my life.

To me, however, it was the meteorological event of the century. I checked my voice mail all weekend, and tomorrow is D-Day, the day I come face to face with this client who I hope I'm going to be able to help and who I hope to have a good rapport with, in spite of what was a gawd-awful beginning. All I can do at the moment is remember the sound of her screaming and crying at me--a sound that really continues to get my dander up.

Why is it so easy to dwell on this stuff? When something amazing happens, I'm happy for a day or two, and then I move on. But this happened darn near a week ago, and here I am still sweating it.

A couple of years ago, my dad and his then-girlfriend Barb went and took a trip across country. It was the adventure my father was always dreaming of taking, and Barb has a good eye for travelling cheap, so off they went.

When they were coming back after hitting California, they went to Colorado and started climbing a big peak in the Rockies.

To hear my dad tell it, he knew he was running low on gas, but didn't want to waste time seeing the amazing panorama, so up they went, and, you guessed it, the "low fuel" indicator came on.

When they got up there, they asked about gas, and were told they'd have to go back down the mountain when they were done and get it. Dad was told not to worry, just put the car in neutral and glide down the hill.

To hear my dad tell the story, it was the greatest adventure of the whole entire trip. He described the scenery, the people, the car, and gliding quietly down a big mountain road...

All Barb talked about was how pissed off she was that he put them through "that"...

I want to be more like my dad in that regard. I've made great strides in finding the positive and letting most people's issues glide off my back (particularly after reading The Four Agreements chapter on not taking anything personally). But when I can't, man can't I!!!

So my struggle for the week is getting through about 4 hours tomorrow morning and then moving forward. I know once it's over, I'll wonder what I ever got so worked up about.

The Lit Chicks had another evening with Kris Radish last night, and it was absolutely spectacular. She talked to us for the better part of 2 hours, and answered everyone's questions. This time, we read Annie Freeman's Fabulous Traveling Funeral, which was a complete tearjerker, if I hadn't mentioned it already. I really did prefer The Elegant Gathering of White Snows more than I did Annie Freeman, but still in all, I thoroughly loved it and the discussion more than made up for what the book may have lacked.

It's funny, when the club meets in these small groups (there were only 5 of us), the small groups draw closer and closer together and we really get to know each other so well and I really, really love that. The club is becoming everything I envisioned when I started it.

I was looking at jobs to apply for on line the other night, and found a great one at the library at UMW, for which I was eminently qualified. The hours were 3-11, however, and my first thought was, "Not gonna happen, it'd mess up my Lit Chicks night."

So I guess even my job search will be hampered by these girls... But there are far, far worse things, and they're 100% worth it.

I am absolutely dreading it. It's gotten to the point that I can't stand the thought of going in to deal with my:

B) The ineffective muckety-mucks

We are looking into refinancing our house and then hopefully I can quit.

The thought of going in this week, when I look at what's on my plate, is enough to make me want to hang my head down and cry. I spent no time at home this weekend, and got about 1/10th of what I wanted to do actually accomplished. This week is also the week of our Pirates of the Caribbean party, another Dave Barry book signing, I have to work late Wednesday night and early Thursday morning, book club tomorrow, and Charlottesville on Friday.

All this and trying to figure out my future as well?? YIKES!!!

I'm not sure what the future holds, but one thing I'm sure of: It cannot continue to hold my current position with my current employer beyond the next 4-6 months. I truly would lose my mind.

Fortunately, everything on the home front is great. I feel like I'm back on track with my personal life and making progress on meeting people in Fredericksburg as well. I'm enjoying the house, enjoying the neighbors, enjoying my time with my husband, and time with friends as well. I'm learning to set limits that I can live with in terms of my time and travel. I'm finally settling in :)

We are back from our big trip to NY and RI. We spent 10 days visiting my dad and Michael's family, and it worked out quite nicely. We were able to split the week evenly and not overstay our welcome in either location.

After driving back Sunday, I immediately had to go to the Fairfax office on Monday. And then was book club Monday night. I got to bed at 1:30am. Last night, I couldn't sleep.

I am so totally wiped out right now, I want to cry. And of course, there's so much to do now at home, I don't know where to start.