So yesterday was the big day, the day I knew Leah was going to love above all others:  The Magic Kingdom.  I had specially packed her ‘Punzel dress for her, since I was determined she was going to meet Rapunzel on our trip.  We had breakfast at the hotel, Mickey waffles again, YUM!  I had wisely decided she should not put on her dress till AFTER breakfast, which was a good call considering the amount of syrup she had all over her.  Then we got back to the hotel and she enjoyed a strawberry fruit roll up that turned her pink.  So yeah, good job we just let things wait a bit.

We left for the Magic Kingdom around 9 and had to hop the tram.  I gave her the choice of the monorail or the boat once we got to the other side and she decided she wanted to ride the monorail, so we did.  There were a bunch of old people from NC on our monorail ride and the ladies went nuts over Leah and her outfit.  They asked if we had bought it at Downtown Disney, and when I said no, that it had been made by a friend, then they just went absolutely crazy!  She smiled that little impish grin of hers which if you didn’t know better, you’d swear meant she was being modest, but in reality means, “Keep it coming, ladies.  I live for this stuff.” 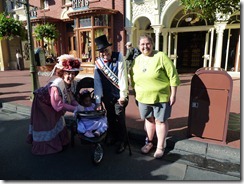 We got off and through security and as soon as we hit Main Street USA, she went nuts seeing the castle. I knew from my online research that Punzel was supposed to be at a theater on Main Street, so I started looking around, and we ran into the Mayor of Disney and had a great time with him and his wife, chatting and taking pictures.  He’d been stationed in Blackstone, VA at one point and I got to hear all about his adventures there.

When we finally got done with him, we went back towards the front and I happened to spy a “Fast Pass with the Storybook Princesses” kiosk.  I just knew this must be where they had stashed Punzel since I had seen on Mary’s pictures her girls reading a book with Punzel.  I got our passes for about 2 hours later, and we were off! 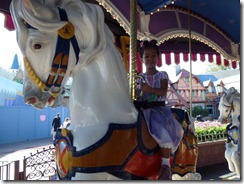 We headed to do a ride, since Leah is all about the rides, and our first ride was It’s a Small World.  This seemed appropriate since it was the first ride I took Penny on as well.  Leah liked it well enough, although she really was happy to get off and go wait on line for 20 minutes to do Peter Pan’s flight.  She is a bit of a challenge in the line waiting department. She climbs the barriers, swings from the ropes, etc.  It’s a wee bit embarrassing.  I do my best though.  So we did Peter Pan and she loved that, and then we found we had time left, so we went on Cinderella’s Carousel, whatever the official name of it was.  I got her up on a horse and took a couple of pictures and was prepared to ride the thing, when Leah informed me that she is a big girl, thank you, she does not need her mom riding with her any more and she wanted to do it herself.  There were no objections from the Disney staff, so with a giant lump in my throat, I got off and let her ride it herself.  She was so proud of herself, it was just amazing.  Afterwards, we watched the Mickey’s PhilharMagic 3D movie which practically had her doubled over laughing and was a great quick break before we hit the big time… Meeting the princesses was such a treat.  Leah was literally star struck, no matter how kind and nice and gentle they were, she could not force a single syllable from her lips.  It was hilarious.  Cinderella asked me if she’d seen us before and smiled a big toothy grin at me, and I was like, “Ummmmmmmmm…”  She really wanted an answer.  I told her I didn’t think so, and I checked our pictures, it doesn’t look like she was one of the other princesses we had met the day before, but who knows!  There was a party of 7 ahead of us taking up Punzel’s time, and but after Cinderella, Leah was seriously about to pass out, so meeting Punzel was more than she could bear.  She was in a little kid coma.  She had the little stuffed Pascale that came with the doll the hotel had given her, and she kept waffling as to whether or not she was going to show it to Punzel, so it was in the bag, out of the bag, in the bag, out of the bag.  Finally she decided to show it to her and it was her turn. 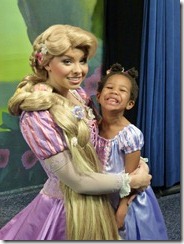 I am not even kidding when I say that *I* cried when she met Punzel.  It was just clear how much love these women devote to their jobs and Leah was just star struck by meeting her favorite princess.  Punzel got right down with her, signed her book and patted Pascale and talked with Leah so nicely and kindly.  They hugged and admire each other’s dresses and hair and it was just such a special moment.  Just awesome.

So the people ahead of us moved on from Aurora, so we decided to go meet her and Leah took her time with her.  The Disney photographer snapped a few pictures and then turned to me and said, “That’s quite an assortment of rings on your necklace!”  I said, “Yes, this was my husband’s wedding ring, and mine.  He passed away recently.”  and then I really started to cry.  She was like “Oh my gosh!!”  I sniffled, “Yes, this trip to Disney was the last thing he really did for us” and then showed her the picture charm of the two of us that I had gotten from my secret Santa.  She looked at it and the rings and then she started to cry.  It was kind of hilarious, two grown women sniffling, and to her credit, Aurora kept Leah very busy while the photographer and I hugged it out.  I’m sorry I don’t remember the photographer’s name, but she said, “I love that you keep your rings so close to your heart”.  And then it was time to go, so she said she’d keep us in her thoughts and prayers and we left. 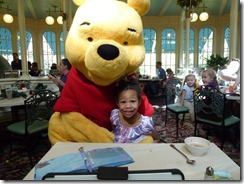 We had about an hour before our lunch reservation, so we headed to Adventureland. Leah caught sight of Aladdin’s Magic Carpet ride and had a great time putting us way up in the air and then plunging us down again.  then we hit Pirates of the Caribbean, which she immediately wanted to jump on again, so we did.  Then we went back to the Crystal Palace for lunch with Pooh and the gang, and she enjoyed eating a pickle, marching in Pooh’s Friendship Parade, and meeting Pooh, Tigger, Piglet, and Eeyore.  She tickled Pooh’s tummy and pulled Eeyore’s ears.  Then she caught sigh of the fact that Pooh had a zipper up his back and grew immediately suspicious.  So we hightailed it out of there! Lunch was a blur of rides.  We got a Fastpass for the Little Mermaid, did It’s a Small World again, watched the movie again, and Pirates again.  I talked her into the Haunted Mansion, and at first she was scared, but she wound up loving it and demanded to do it a couple of times, so I was impressed by her bravery on that score.  We went over to FantasyLand and were just in time to get in the front of the line to meet Gaston, which took up just enough time to get us into Ariel right on time.  It was hilarious watching Leah with Gaston—she is well aware that he is a “bad guy” and she really didn’t want anything to do with him, although she did it for me.  He was pretty hilarious, actually, saying stuff like “It’s hard to be so beautiful isn’t it?  I know.”  and “tell Belle you enjoyed hugging me” and crap like that.  Leah resolutely refused to hug him, but honestly, it was just so funny. 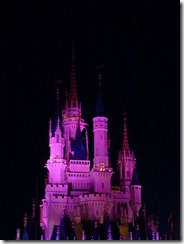 the new Ariel ride is beautiful and fun and I am pleased to see they are building a new Snow White ride as well.  Something to come back for!  By now it was after 6, so we had fastpasses for Winnie the Pooh (which came with a surprise fastpass for Dumbo) and rode the tea cups and then Winnie the Pooh and Dumbo.  Then it was clear exhaustion had set in, so we headed out.  The Electric Light parade was about to start, so we picked a great time to leave.  There were all of 8 people on the boat when it left, and we got to the parking lot in record time.  Leah fell asleep in her car seat before we ever left the parking lot and I carried her up to our room and then ate a PB&J for dinner.

A lovely day and another to come!  Plans for today include meeting Mickey Mouse and Tinkerbell, doing “lots of rides, Mama, ALL the rides!”, and a dessert buffet and fireworks…  Hard to believe it’s the last day of our trip, but it has been a real balm to the soul.