The last time I blogged was on 9/11 and little did I know that all hell would continue to break loose around here.  We got our basement fixed up beautifully—I’m happy to say you would never know anything happened.  There is one less couch and there is a lot of extra lighting now, which is awesome, but other than that, life is back to normal downstairs!

In the meantime, the car needed new brakes and I needed glasses, which added up to a lot of money!!!!!  Thankfully we were able to get both done and finish paying off the credit card bills, because things just kept getting crazier!

Unfortunately, just as we were preparing to go to NY for my dad’s 60th, my mom called to say her long time companion Jim had collapsed after having suffered a massive heart attack.  He passed away on September 28th.  Having been a big part of our lives for a number of our years, this was a really sad loss for the family.  I was thus in Florida for almost 3 weeks.  During this time, Kristin from Iceland moved out.  I was disappointed in a way, but I think it was probably for the best and since I am still working with her new family’s other student, I will see her here and there.  I very much doubt we will host next year although I said that this year, so who knows, but I’m excited to say that Penny’s brother Mickey is coming to spend Christmas with us this year, so it’ll be kind of like celebrating with an exchange student anyway and we’ll get 2 weeks of fun before sending him on his way. 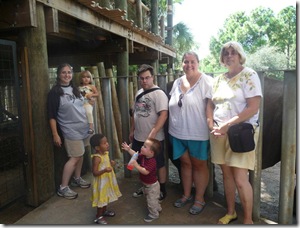 Florida was a good time, despite the circumstances.  I found things for Leah to do in and around Vero Beach and we went to the Brevard Zoo, SeaWorld, and Lion Country Safari.  I do believe the kid knows more about animals than any other 2 year old around!  Her particular favorites were the sharks and penguins at SeaWorld.  I also took her to see the movie A Dolphin Tale, which she loved and went around telling everyone she could find that the dolphin broke its tail.  We came home from SeaWorld with a 3 foot long Shamu, and just recently Leah ripped all the stuffing from ‘Mu’s tail and has informed me that Mu has a broken tail like the dolphin.  When I re-stuff Mu, we shall remedy his broken tail with a band-aid!  We also paid some extra money to go pet a rhinoceros, which was a pretty awesome experience that I won’t soon forget!  Leah liked taking a scrub brush to him and tickling him.  Whenever I ask her about the rhino, she says, “BRUSH!” (you can kind of see the rhino behind my mom in the picture above)  So we did a lot of things we might not otherwise have gotten to do and I got to go to the beach (even if it wasn’t Myrtle Beach) and just chill out and help out my mom as needed.  We kind of tossed around the idea of Disney World, I think more because Mom and I wanted to go than we really wanted to take Leah, but cooler heads prevailed—she really is still too young and we want her to remember that first time forever.  Another couple of years! 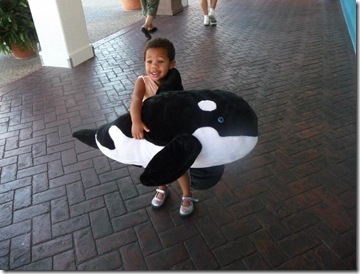 This class I am taking is really kicking my butt.  For 3 weeks, I basically did nothing, as the professor told me not to worry about it, so I’ve been playing catch up ever since.  We have group projects to do, and I’m happy to say I have great group members who really picked up the slack for me, and so I am now going to work doubly hard to make up for the work I didn’t do on Assignment 2.  Only 36 days till the class is over, THANK GOD, and let us hope I never take a class about organizing data and information EVER AGAIN!  Next semester I hope to take Introduction to Archiving so I can see if I really want to pursue that as a career option like I’ve been thinking I might.

I had fun in October going to the Kennedy Center to see Les Mis with some members of my choir, and then spending that evening answering phones for WAMU at their annual member drive.  We had a recordbreaking night, getting $35,000 in 3 hours, which is pretty incredible.  I love volunteering during The Big Broadcast—the most interesting mix of people volunteer and we had  fun table.  It was nice to unwind and let my hair down after the stress of Jim’s death and the classwork piling up.  The production of Les Mis was spellbinding—literally I wept many times and it was just a great performance. 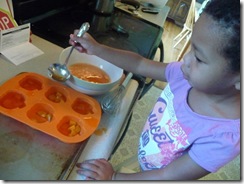 Leah and I have been having a lot of fun getting ready for Halloween.  We’ve been doing little projects now, like baking bread and making pumpkin-shaped jello and pumpkin-shaped crayons from all the crayons she broke to bits.  I went over to the local teacher supply store and bought a few charts for the walls so we are learning our colors and taking little scavenger hunts.  We talk about the weather and count the days on the calendar.  We went to the pumpkin patch and carved pumpkins today.  It’s fun and keeps her engaged.  I am looking forward to getting her into preschool, but am not in any rush.  We are keeping busy with a music class and MOPS and various and sundry other activities and are looking into gymnastics.  She’s a fun kid and able to do so much more.  Even though I miss snuggling with a newborn, I do enjoy these toddler days!  I like being crafty and even little things turn into a lot of fun for her, so I try to come up with something to keep her interested and teach her something new, while allowing me to stretch my creative muscles and keep from getting cranky!

Hopefully our bathroom project will get underway soon.  We finally got our loan approved and got the money to pay the contractor, so we’re ready to go.  We picked a design and that’s that!  It’s hard to believe it’s been nearly 3 months since the Great Flood, and while it had unintended consequences, it’s fun to think of the positives of the situation and how we’re going to come out of it.  We also paid off our car this month, ahead of schedule, which loosens up our budget some to do some other things.  It’s the first time in 6 years we don’t have a car payment.  We nearly got hit today by the local ne’er-do-well on our way out to get pumpkins to carve, and I thought, “Wouldn’t that just be my luck!?” but thankfully he got back on his side of the road with about 6 inches to spare before he hit us. 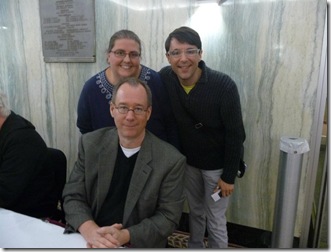 Joe and I went and saw the MST3K live show, Cinematic Titanic, again on Thursday night.  It’s a fun way for him and I to celebrate our frienshipversary—this year being #17.  It won’t be long now before I’ve known him more than half my life, which I find mindboggling.  We had our traditional Bertucci’s dinner and then walked around DC for a couple of hours before the show started.  Afterwards, we got on line for the signing and I got myself a poster to have signed.  We also discovered Joel was allowing people to take pictures, so of course, we took full advantage.  I like that all of us are modeling sexy eyewear! :-D  My next big celebrity trip will be in November to see Diane Keaton at 6th and I Synagogue, which should be quite interesting.  I enjoy watching her, and she seems like she’d just be a really nice and down to earth person, so I’m looking forward to meeting her!  I wonder if she’s going to wear something crazy or just dress casually.

In general, I’m just feeling quite content with life.  I seem to have made friends with some exceptionally kind and low key people—just last week I was able to go out to dinner with 3 new girlfriends and we all sat around and laughed and chattered until before we knew it, 2+ hours had gone by.  I’ve joined a new book club here in town, which is fun, and my NoVa book club seems to have gotten back on track, surviving the 7 year itch.  I’ve become very friendly with a wonderful couple down the street and their daughter, all of whom think Leah is the best kid in the universe (and of course, I quite agree!).

I’m keeping busy, busy, busy and keep telling Mike, “I promise, I’m going to calm down…after this week”.  Fortunately he’s been patient with what has been a ridiculous autumn!

There have been a lot of fun little things going on and I always think, “Oh, I should blog about that!” but usually I am too tired!  It’s a shame—Leah says some damned cute stuff that I’d like to remember and we have a lot of fun and do a lot of things, but time just keeps on slipping away…  I really can’t believe tomorrow is Halloween!  Then it’s November, and I do debate doing NaNoWriMo just so I can get this damned whiteboard down from my bulletin board and finish my book!  And then in a few short weeks, it will be Thanksgiving.  Mike and I have been debating what to do in April for our 10th wedding anniversary, and yet it seems like just yesterday we were getting married.  I feel too young to be this old and too old at the same time.

I’ll close here and who knows when I’ll blog again!  The new Facebook sucks, but it doesn’t seem to keep me from using it, so of course, you can get my updates there if I don’t update here :)  Ta ta!