All I Want For Christmas Is…

…a fast forward button. I’d like to get the next 7 months out of the way and not have to actually live through them. I’m tired of the day-to-day struggles, the ever expanding mounds of paperwork, the family tensions, the phone calls, the uncertainty of what’s going to happen next. I would like to wake up and it’s next summer and everything has happened, everything is settled, everyone is happy or at least happier. I don’t want to live through the first anniversary of Mike’s death. I don’t want to survive turning the calendar to 2013 and leaving Mike behind in “last year”. I don’t want to go through Christmas, New Years, his birthday, Valentine’s Day, Leah’s birthday and our wedding anniversary without him. It’s hard enough going through every day, regular days, without him. 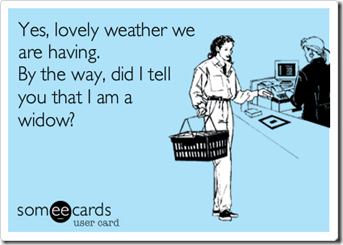 As embarrassing and humbling as this is, I am asking all of my loyal and first time readers to please pass along this website: Save Leah's House We are under threat of foreclosure and I really don't want to lose our house after everything we have been through. My sister and I were talking about if we could find 300,000 people to give us $1, we could pay off my mortgage entirely and I wouldn't have to uproot Leah and traumatize her further. Even if you can't donate $1, would you please consider posting this link on your website, Facebook, blog, Twitter, etc? I'm so appreciative. Thank you!

A Word About “Entitlements”

In the aftermath of last night’s election, I’ve been reading a lot of comments from people who didn’t vote the same way I did.  Not in a gloating sense or in taking joy in their misery (and believe you me, some of them put the misery I felt in Bush’s re-election to absolute shame!), but just to see what they are afraid will happen in Obama’s second term.  Here is just a sample of one of the comments I read today: “the entitled are still sitting at home while I work to support their laziness.”  I chose this one because it’s pretty anonymous, but there were some that made my hair curl.

Because, I’ve got to be honest, I’m sitting at home, taking a handout right now.  For anyone who may be reading this who doesn’t know, the condensed version of my tragedy is that my 38 year old husband collapsed and died at dinner just about 4 months ago.  I was a stay-at-home mom to our daughter and a graduate student.  I had and have no intention of returning to my previous career, so I had allowed my certifications to lapse and I cannot return to my former employer without passing tests, and a whole lot of rigmarole.  I’ve been out of the workforce for nearly 4 years now.  So the types of jobs I could currently probably get fairly easily would not pay my bills.  I am already facing foreclosure on our house and am attempting to force the banks into helping me with loan modifications so that I can maintain our home.  It’s the only place my daughter has ever known, and to rob her of that security after her father died literally before her very eyes is heartless and cruel.

To date, I have not received my husband’s official death certificates.  This means I cannot receive any settlement from his former employer (the federal government), although there is limited money to be obtained from them when the death certificates are issued.

This means that I was forced to apply for my husband’s Social Security.  It was the most humiliating day of my life the day I went through my Social Security interview.  My husband was a very proud man, and one of the things he was proudest of was that despite being disabled, he went to work every single day and earned his pay.  He did not collect Social Security, although he was certainly entitled to it.  When I had my interview with SSI, I felt like a total and complete failure.  But I literally had nowhere else to turn to attempt to support myself and my daughter.

Social Security is not adequate to meet our mortgage payments and utilities and other expenses.  I attempt each month to put Leah’s share of the money into a separate spot for her.  Sometimes I am successful, sometimes I am not.  This month she needs a winter coat, among other things, and it’s not easy to save up and continue to fully commit that money to savings.  But I do look forward to someday handing her as much of that money as I possibly can and telling her that her father wanted her to have it.

I am not out buying Cheetos and cocaine and sitting on my couch watching soap operas.  We have stopped eating out even half as much as we did.  I spend 6 hours every 2 weeks combing circulars and comparing prices so that I can get good food cheap.

I am not sleeping around and trying to get pregnant so I can have lots of welfare babies.

Every month when that money is deposited into my bank account, I weep.  Because all it is is a symbol of what I’ve lost and my inability at present to care for myself.  And if I become employed, they will take the money back.  So whatever I make has to be able to compete with what Social Security is giving me, and frankly, I very much doubt that being a checker at WalMart is going to come close.

But the fact is, yes, I am entitled to that money.  For years, literally years, Mike and I have both paid into that system, and if you’re employed, then check our W2 or your pay stub and you will see where Social Security is deducted from your pay.  Every year, you get a statement from Social Security that indicates what your award will be if are disabled or if you retire, and what your survivors will receive if you should suddenly die.  You are entitled to that money.  Let me repeat that:  You. Are. Entitled. To. That. Money.

And make no mistake, every time you make a blanket statement that says “those people just sit around and collect their check while I’m out working”, you lump everyone like me and my daughter into that category of good-for-nothing, lazy bastards that allow you to make yourself feel good when you have no idea what “those people” are going through.  And unless you have personally interviewed every single recipient of Social Security, which in 2009 was somewhere in the neighborhood of 55 million people, I’ll thank you to keep your opinions to yourself.  Are there people who take advantage of the system?  Probably.  But the vast, vast majority of us are honest people who need some help.

I wish to God I didn’t have to rely on Social Security right now.  I look forward to completing my education and returning to the workforce.  But I am thankful that I have it to rely on and that while everything else is on hold, we are able to have food, electricity, gas, and warm clothes.  And I’m sure that my fellow recipients feel the same.

The other night, my mother and I were sitting around watching some truly horrible reality television when she asked if I had anything gooey and chocolate-y around. A quick check of the freezer revealed that no, I did not. It was 9:30 at night. I put a pair of jeans on over my nightgown and became that woman. That disheveled woman wandering the bakery at Giant at 9:30 at night. Utterly, shamelessly, obliviously in my own universe. I haven’t been in that place since I was up night after night with a newborn.

My mother was alternately dying laughing and absolutely mortified. Mike and I had a Christmas tradition where on Christmas night after everyone went to sleep, I would sneak out to McDonald’s in my pajamas and get burgers at 11 o’clock at night, but there’s a big difference between going through the drive through with a coat on and wandering around Giant out in the open.

Looking back on it, I’m a bit mortified. But I got cake.

I’ve been re-reading some old journal entries on my blog and trying to remember the person I was before July 12. From what I can gather, that individual was organized, neat, competent, spontaneous, independent, and fun to be around. Today I live in a home that is cluttered, I can never find my keys, wallet and phone, I seem to be constantly asking friends and family to keep me company, I can’t find it in myself to return phone calls, and I seem to be fearful and needy.

Being in my home is both a blessing and a curse—I hate being there where he died but I hate going out. Our home was Mike’s pride and joy—we occasionally talked about getting out from under it, but he said he’d just be devastated if that ever happened. It was tangible proof of all he’d accomplished after a youth of being told he couldn’t possibly amount to much. We lived in our home 3 days shy of 7 years on the day he died and were talking about all our good memories. Now all I can seem to remember is that night and the four month expanding nightmare that has followed. But if I should leave it, I will be in a place without him, a place he never knew, and I can’t imagine that either.

I cling to Leah as my lifeline, but I also secretly want her to leave me alone so I can lie in bed and cry. She is the most patient and sweet little spirit, far too good to be stuck with such a mother as me at the moment. And I have always prided myself on being a darned good mom.

For three years, I worked hard to cultivate a positive attitude and general optimism about everything in life. Mike’s death robbed me not only of my husband, but also of my sense that things would work out for the best and everything would be alright in the end.

I loved who I was as Mike’s wife, but I don’t much care for myself as his widow.