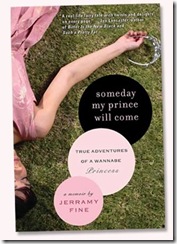 I am pleased to say that I have found my first 5 star rated book of 2010:  Jerramy Fine’s enchanting Someday My Prince Will Come.  This is a book I absolutely devoured over the past week, sneaking in reading time wherever and whenever I could get it (seriously, I brought this book to my WW meeting this morning just to get in 10 pages without the baby crawling around on me).

Fine is one of the original Anglophiles.  As a little girl, she comes to the conclusion that she will some day marry Peter Phillips, Queen Elizabeth’s grandson and son of her only daughter Princess Anne.  She scrupulously studies how other women have gone on to marry their princes, what schools they went to, how they met their match, clothing, manners, you name it, she studied it, and began to pattern her life after such role models as Princess Grace, Princess Diana, and Jackie Kennedy.

Eventually she finds herself at the University of Rochester in New York State (as someone who grew up not far from Rochester, I was impressed she decided to go there—impressed at her nuttiness!!!  I wanted to get as far the hell away as I could!), and during her junior year she does a semester abroad, heading to London to work at Parliament.  Sound the trumpets, because during that experience she meets Princess Anne for the first time!

Eventually her semester abroad ends, she returns to NY to finish her degree and then enrolls at the London School of Economics, thus charting her course to be in England full time.  She rubs elbows with Earl Spencer, Princess Anne, and the Duchess of York, in addition to plenty of English guys, and grooms herself to be the perfect addition to the royal family.  She travels the country sightseeing, and just lives the Anglophile dream.  Her dream.  My dream.

I came away from the book just loving Jerramy.  We have a similar sense of humor, so parts of the book were laugh out loud to me.  For instance, her parents are kind of new-age types who move the family to a small town (as in the size of the town I grew up in, 300+ people or so) to get in touch with nature.  As she talks about her royal dreams in contrast with what her life is actually like, she writes, “Meanwhile, life with the hippies was not improving.”  Just this one line made me giggle--the sense that they are not Mom and Dad, but are seen as “the hippies”, it just cracked me up.  I love subtle humor like that.

I won’t give away whether or not she and Peter Phillips ever meet up, but if you love England, you must read this book.  This book served two purposes in my life:

1.  To further enhance my love of England.  I loved reading about her travels around London, her meets and greets with the hoi polloi of English society, her knowledge of the rules of how proper people behave, it made me wistful.  I wanted to hop a plane immediately and immerse myself in the culture as quickly and thoroughly as possible.

2.  To give me some closure to a long festering wound.  You see, Jerramy was bowled over by a number of men in England, men who dazzled her and were never heard from again.  They gave her an amazing, romantic evening, took her number, swore they’d call, and didn’t.  She came to realize that there was a certain class of Englishmen who did exactly that and then went on to feel that all men were “guilty until proven innocent”.  Well, you see, in the late 90’s, a dewy-eyed Susan went to England to meet just such a chap.  We had an amazing week together, seriously mind-blowing, traveling England and seeing the sights from York to London (he took me to Kensington Palace to pay my respects to Diana—I mean, this guy was GOOD!) to Canterbury to Birmingham and even to Wales, culminating in some serious action at home.  I was sure we were soulmates—I have never, ever in my life connected with someone like that immediately and completely.  But when I returned to America, he promptly fell off the face of the earth, resurfacing months later only to tell me that he wasn’t the type of guy to get on with a girl and then dump her cold, and then he disappeared again, this time for good.

Well, Martin, if by chance you’re out there reading this, let me tell you something:  Yes, you are.

So thank you, Jerramy, for giving me a whole lot of healing on that issue.  That has been a painful thorn in my side for 12 years and your book has cured me of any notion that it was anything to do with me.  If I ever get the chance to meet you, I’ll thank you personally.

Seriously, read this book.  If you have known heartache, if you love England, if you have dreams of finding your handsome prince, this is the book for you.

You totally got me wanting to read this, but the Fairfax County Library doesn't have it!!

I knew you'd love it!